You all better get ready.  Sweden is coming to Boston!

Finally, I’ll get my very own Swedish!

While not on the level of say Viktor Stalberg, Henrik Lundqvist, Gabe Landeskog or the countless other ridiculously attractive Swedes that populate the NHL, he does sort of have an Eddie Redmayne/Heath Ledger-thing going on, which I am digging.

What I’m also digging that he is having his BEST season in the Swedish Elite League – 31 goals & 60 points in 54 games.

At 6-foot-3 & 210-pound, Soderberg will bring some desperately needed size and scoring to the Bruins’ corps of forwards. *fingerscrossed*

By all accounts this looks to be a done deal with the only thing left to iron out was for the Swedish Ice Hockey Association to approve his transfer to the Bruins and the NHL.

But after the Great Iginla Caper of 2013, I won’t actually believe it is happening until the man steps off the plane, arrives at the Garden, dons a Bruins jersey, and gets on the ice. 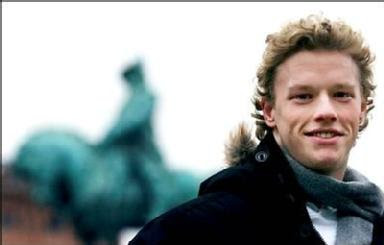 Despite his potentially joining the team with about a dozen games left in the regular season, Soderberg would be eligible for the Stanley Cup Playoffs, provided that he play in one regular season game (Bruins already had his rights and on their reserve list.)

According to Bruins President Cam “Seabass” Neely, the team wants to give him a shot to prove himself.  Most likely he’d see time on the wing, as opposed to his regular center position.

Bruins have courted Soderberg for a number of years, but he always elected to stay in Europe.  Last year, they weren’t even sure if he’d ever play in the NHL.

What I do care about is how Soderberg adjusts his game for the NHL.  He has the skill set but we all know the game is decidedly different in Europe.

How will he handle the physicality and the smaller ice surface? For sure, his size will help, as will his skating ability, but that all remains to be seen.   Should that happen it has the potential to significantly help the Bruins in the playoffs.

Wonder how he is on the power play…