That is when the Pens’ offence sprang to life and took advantage of some uncharacteristic mistakes by my beloved Bruins.  Pens scored 3 goals in under 5 minutes and went on to defeat the Bruins 3-2.

Now, I’m not making excuses [because there is no crying in hockey] but the Bruins did play night before in Ottawa and then had to hop on the plane to Pittsburgh.  Fatigue had to factor it at least a little bit.

Bruins’ #2 goaltender Anton “Dobby” Khudobin got the start and was stellar against the Pens’ potent offence.  Didn’t catch the game? Just check out the video clips here.  Most all of the saves clips are Khudobin’s.

Dobby has save after save after great save.  He was strong and aggressive in the net, especially on the Pens’ 5-on-3 when things could have got real ugly, real fast.

I can’t fault him for the loss because the 3 goals that the Pens did score were all good goals.  And really when the Pens score against you, pretty much all of their goals are good goals. I love Dennis Seidenberg as a player and think that he is seriously underrated.  But last night’s game was sweet and sour for our favorite German. Yeah, I know how you feel buddy.

This was definitely a game that the Bruins could have won.  They only but 16 shots on Fleury and with the way he’s been playing lately, this was a missed opportunity.  They should have peppered him with shots, sent Lucic in there to crash the net, and screened him all night long.  Had they done that, the outcome might have been very different.

Seguin’s goal was tres impressive.  (Watch it here.)  Being able elevate the puck like that while moving away from said puck – Skillz, people.  They don’t teach that in school.

Over the last few games, Seguin seems to have found his groove. He’s skating well, finding the puck, and looks like his scoring touch has returned. Add to that the great play of his line mates,  Bergeron and Marchand,and the Bruins’ 1st line is just chugging away like a little train.  Choo Choo! All aboard!

Bruins vs. Pens face off again this Sunday, March 17th.

This time, we’re gonna have the luck of the Irish on our side. 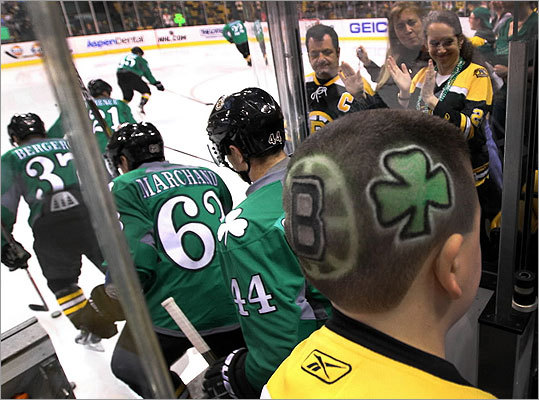