Variety is the spice of life and sometimes here at WUYS, we need to mix it up.  For today’s Foxy Friday, we delve into the world of college hockey and select Boston University forward Matt Nieto as the newest member of this illustrious club.

Now, I know that you probably have a few questions like  “Who the hell is Matt Nieto?”  “What qualifies him for this prestigious honor?”  “Does he have a mullet in this picture?”

His Foxy Friday qualifications are obvious.  Not only does he have the eyebrows, which we appreciate,  Nieto has also got some serious hockey game, like all the Foxy Fridays who came before him.

So essentially what that means is that when Nieto is not on a mission trying to find Mr. Warren G, he’s busy being a boss.

Nieto is foxy because he is a super fun and talented player to watch.  He has great speed and in four strides can accelerate past opposing players and get to the net.

He has a “nose for the net” as they say, and if he gets the jump on the defender and gets the puck into the offensive zone, there is a pretty good chance that he is going to finish.  He has a great release and is becoming more confident shooting the puck as evidence by his 103 shots on net this season.

As a season ticket holder, I get to watch him play almost every weekend and each time he touches the puck, you get this little flutter in your tummy like you know something really awesome is about to happen . Like scoring goals while you’re getting hauled down
courtesy of terrierhockey.tumblr.com

Last year, BU lost some key talent who decided to go pro after their junior year and I am wishing and hoping and praying that Nieto doesn’t leave as well.

He very well could wear the “C” for the Terriers next season and has all the makings of a captain.    Another year playing at the collegiate level would afford him the opportunity to develop physically as well as developing his skills and leadership, making him all the more ready for the NHL. 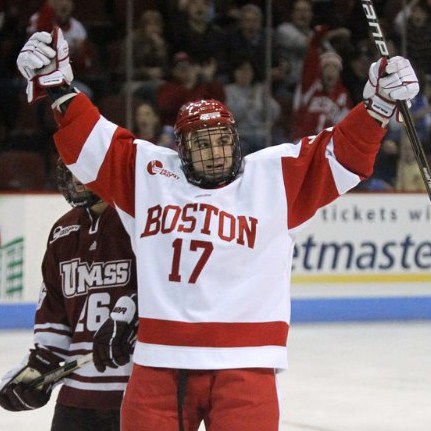 Rumor has it that Jonathan Toews is his favorite player.  No secret how we feel about JT so we will say this –  if Nieto’s game develops into anything remotely close to Captain Serious’, it’s going to be pretty freakin’ awesome.

Well played, Sharks.  Not only are we super excited that he could become friends with Jumbo and Logan “Rookie of our Lives” Couture but also, because we’re betting that Nieto’s cornhole skills are way better than Patrick Marleau’s…but not better than my brother’s. It’s been scientifically proven that being named a Foxy Friday brings you good luck.

Tomorrow night happens to be Terriers’ final  game of the season.