This was bound to happen.

Twas only a matter of time until the “Lil’ Ball of Hate” aka “Squirrel” aka “Marshamont” did a bad, bad thing and got himself Shanabanned.

Marchand has been suspended for five games and will forfeit $152,439.02 for clipping Vancouver Canucks defenseman Sami Salo during  Saturday’s game.  Marchand will miss games vs. Winnipeg, Montreal (GAH!),  Carolina,  Florida and Tampa Bay.

Check out the Shanabanned explanation here.

Marchand, who also received a two-game suspension in March 2011, has been classified as a repeat offender (for shame!) under the terms of the Collective Bargaining Agreement. 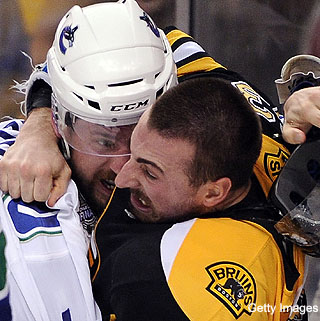 The thing about Marchand is that he’s like a little kid, constantly pushing his boundaries just to the limit.  It’s like “how far can I go and how many times can I annoy my parents before I get grounded and sent to my room with no supper”?

Marchand is young, aggressive, and he chirps ALOT.  He has the skill and speed to back it up, but that also leaves him a little bit undisciplined at times and prone to take some bad penalties, like the one against Salo.

Obviously this is a blow to the Bruins, as Marchand brings a certain level of intensity and a deft scoring touch, it by no means hurts the team’s chance to win those 5 games without him.

The Bruins are a deeeeeeeeeeeep team (especially at forward) and will shuffle the lines accordingly.   Beniot Pouliot will take Marchand’s place on the 2nd line with the Professor and Teen Wolf.  He’s filled in for Marchand before and has done an excellent job.   Zach Hamill will be called up from Providence and will center the 3rd line with Chris Kelly and Rich Peverley.

Like any true Bruins fan, I will defend my team till the death, but I’m totally okay with the league’s decision.  Do the crime.  Do the time.