A Stanley Cup ring, that is. Not only can it be worn as a ring, it can also be used as a paperweight, a meat tenderizer, and help you to signal rescue planes should you ever become lost in the Canadian wilderness.

And there are 505 of these pretty baubles to go around.

Players got their rings last night at the Boston Harbor Hotel.  Even players no longer with the team, like Mark Recchi and Michael Ryder, came in for the event.  Ryder had to get special permission from his new team, the Dallas Stars, to come.  Sadly, Marc Savard was not able to join the team, as he is still recovering from concussion.

But you know who was there…WUYS fave Tyler Seguin.  Looking very dapper in a pink shirt, btdubs.

Wonder if his mom picked that out for him? 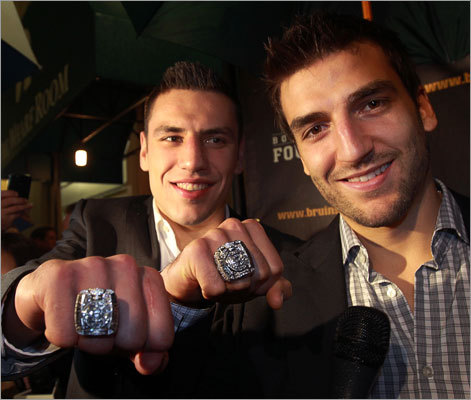 Looch and the Professor show of their bling.

Gentleman, go ahead and “frost yourself”.